International Reserves in the world’s central banks have declined from $12.032 Trillion dollars, the peak reached on August 2, 2014, to $10.814 Trillion dollars on January 13 this year, as registered by Bloomberg. This is a decline of about 10.12%. 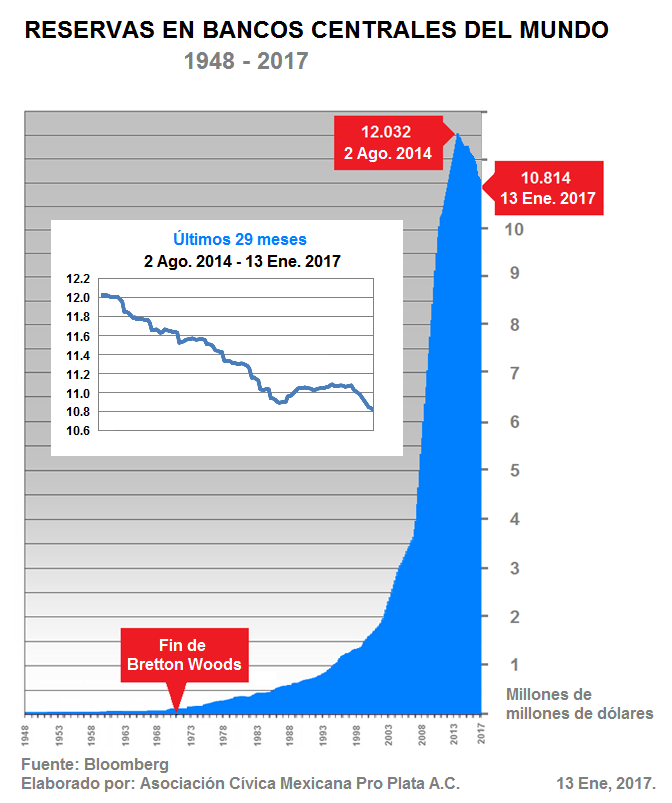 Over the past 29 months, the decline in Reserves took place at a rate of about $42 billion dollars a month. At this rate, by the end of 2017 International Reserves will likely decline by another $504 billion dollars, to $10.31 Trillion, which will increase the decline from the peak in 2014 to 14.31%.

However, the rate of decline is almost certainly going to increase, because the spring that has fed International Reserves since 1971 – the US Trade Deficit – is the object of the attention of Mr. Donald Trump, and he has expressed the intention of stopping up this spring by reducing or eliminating the US Trade Deficit, which feeds International Reserves to central banks of the rest of the world.

The decline in the total of International Reserves is a clear sign of world credit contraction. The economic consequence to a world that has been built upon the premise of ever-expanding credit will be the increasingly desperate liquidation of investments by businesses and individuals around the rest of the world, in order to pay off previously incurred dollar-denominated debts. The liquidation will be a huge struggle against the opposing current of increasing scarcity of dollars.

Ludwig von Mises pointed out many years ago, that once a central bank indulges in expansion of credit by lowering the rate of interest it charges on loans, it cannot stop expanding credit: it has to go on expanding credit by lowering even more, the interest rate it has set. If the central bank decides to let the market once again set the interest rate, then the previous expansion will turn into a general a liquidation, to clear out the malinvestments created by the artificially induced expansion. If the central bank does not allow the market to set the interest rate, then the expansion of credit will continue until it produces the crack-up boom, which is followed by a massive debt liquidation.

The world entered a credit-expansion binge in 1971. The US, as the world's central banker (liberated from the restriction of redeeming dollars for gold) entered upon a long credit expansion that fed dollars to the world in exchange for the world's products. The world responded to the incoming flow of dollars to its central banks, with a corresponding credit expansion which fostered a credit-based prosperity around the world.

The graph elaborated on the basis of Bloomberg data is telling us that the world reached the point where a general liquidation had to set in, in August 2014.

Now Mr. Trump plans to step up the rate at which the world is trying to liquidate its dollar debts, because he intends to stop up the spring, the US Trade Deficit, which feeds dollars to the Central Banks of the rest of the world.

Thus I am led to believe that 2017 will be a year of economic chaos for the world; the contraction of credit in the world in 2017 will manifest itself in the form of bankruptcies at all levels, destruction of financial assets, collapsing prices, massive unemployment, currency devaluations left and right, and of course, world-wide political instability.

Everybody loves a big-spender. The man who spends lavishly is listened to with respect and his every word is marked. He is the center of attention of a great coterie; all try to please him. But when his money runs out, he finds himself out in the cold; his friends no longer show up, nobody cares any longer about what he likes or dislikes. He embarrasses his former friends.

By rejecting the world's products - except for oil, of course - Mr. Trump is alienating the friends of the US. Trade promotes friendship and interest in the welfare of your trading partner. No trade produces mutual indifference.

By cutting down on foreign goods entering into the US, the US will lose influence around the world. Why listen to the US, when it turns its back on your products, on what you have to offer? The rest of the world will now go its own way, indifferent to US interest and to the negligible value of its superficial culture.

The operative word is: FORFEIT.

Your email has been sent